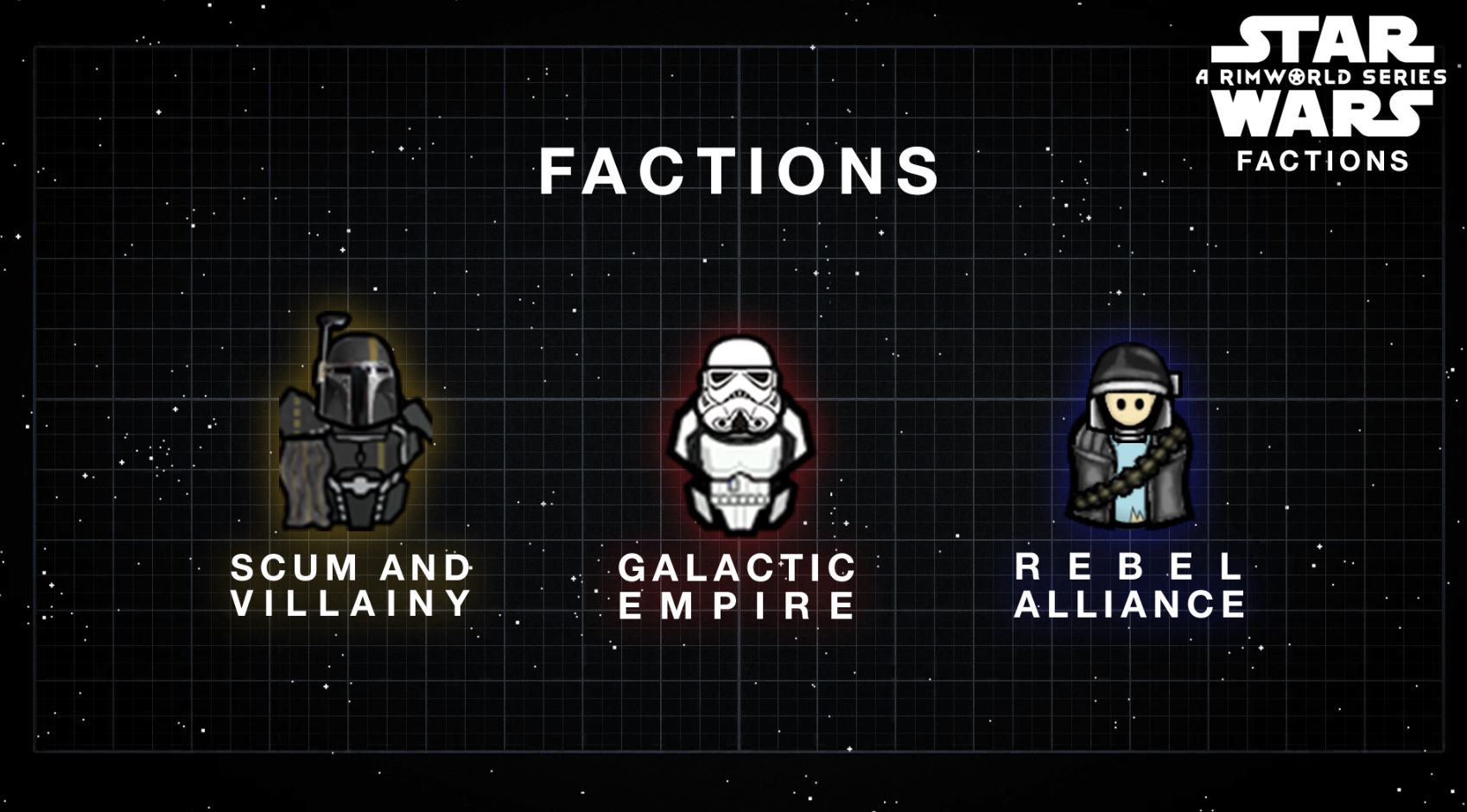 I love it when worlds collide. One of my most played games on Steam is Rimworld. My favorite game of all time is Star Wars: Knights of the Old Republic. You can imagine how pumped I am to bring them together. One of the greatest things about Rimworld is the community as a whole, including the modding community. Just about every aspect of Rimworld has and can be modded. There are mods that add new systems, UI changes, completely overhaul the game and add new races. Today we are counting down 5 Star Wars related mod for your next playthrough. This will include everything from race mods, to apparel and much more. The list is in no particular order and is completely created from personal taste. This mod only includes mods that I have installed and played so they come fully endorsed with Jeff’s Rimworld mod seal of approval.

Each mod will have the link to the appropriate Steam Workshop page underneath the first image. For more information check out the each page and check it out. Without further ado, lets crack on with it then.

1. Star Wars The Force by Jecrell

Star Wars The Force is a mod for Rimworld which literally adds the force to the game. It is the ultimate mod for people who wish to play as a Jedi in Rimworld. I would consider it a must-have for anyone looking for a genuine Star Wars experience in Rimworld. The mod adds not only the force in general, but a variety of traits as well. Not all pawns on the Rimworld will be force sensitive. You will have to carefully look at raiders and traders to see which ones will be able to learn force powers. Any race can learn force powers.

Force users will be able to upgrade and learn new powers with a levelling system like with an RPG game. There is also an alignment system with force users that will change to dark or light alignment based on the force powers you pick. Most people might consider this mod quite overpowered compared to the vanilla game but Jedi are canonically overpowered.

Star Wars – Factions is another mod by the same author as Star Wars – The Force.

Star Wars – Factions adds three new factions to the game as seen in the image above. It adds the Empire faction, the Rebel faction and also the bounty hunters, known as Scum and Villainy. The mod adds a bunch of new events along with the mod including a new ‘war’ function. The Empire and Rebels are constantly at war and the war may break out on your map. (although I haven’t had that happen in my experience with the mod). You can travel to and trade with all of the different factions as long as you are on good terms with them. There is a bunch of new Star Wars related items as well included with the mod. Install it and enjoy it.

The author of the mod hasn’t been around for a while but luckily someone has taken up the reigns and created an updated version of the mod for 1.2 which can be found here.

This mods adds 5 new races to the game along with a few race-specific clothing items. The 5 races that are added are Twi’lek, Rodians, Togruta, Ewoks and my personal favorite Wookies. The races have different color variations and the models will be different depending on whether the character is male or female. The models look great in-game and blend in well to Rimworld ascetic and really captures the races from Star Wars. The characters also have different body parts, depending on what race they are and will have different skin types to make hats from for the sadistic Rimworlders out there.

The mod adds a great variety of Star Wars races and the race apparel that can be researched in the research tab is just the icing on the cake. you can research Ewok tabards and Wookie bandoliers.

This mod adds a bunch of different creatures from Star Wars canon to Rimworld. It has attack creatures like Nexu and the Krayt Dragon, and also some farming creatures like Nerfs. The creatures will only spawn in biomes that are appropriate. You won’t expect to find a Rancor in the snow and you shouldn’t expect to find a Tauntaun in the desert. It’s a great little mod and really adds to the Star Wars experience. The Rancor beasts and Nexu are genuinely hard to beat. Couple this with the Giddy-Up! mod series to ride around on a Krayt Dragon. Need I say more?

There is an unofficial update to the mod found here.

This mod believe it or not, adds fully functional lightsabers to the game. The symbol of hope in the galaxy, lightsabers are a melee weapon that can cut through just about anything. Coupled with the Force Powers mod this one helps you create the perfect Jedi or Sith warrior. Lightsabers aren’t only wielded by Jedi, any pawn is capable of wielding them as long as they can hold a weapon.

You can find lightsaber crystals by breaking open rocks on the stone cutting table and craft your own lightsabers. There are three different types of lightsabers, Double bladed (like Darth Maul’s), Single Bladed (classic) and the cross-guard saber like Kylo Ren’s.

An unofficial updated version for the mod can be found here.

That was the list of my top 5 Star Wars mods for Rimworld! Do you have any other Star Wars related mods that you think should have made the list? Comment them below so I, and other players can check them out!

Related: The 8 Best Games Like Rimworld | 10 Must-have Mods for Rimworld