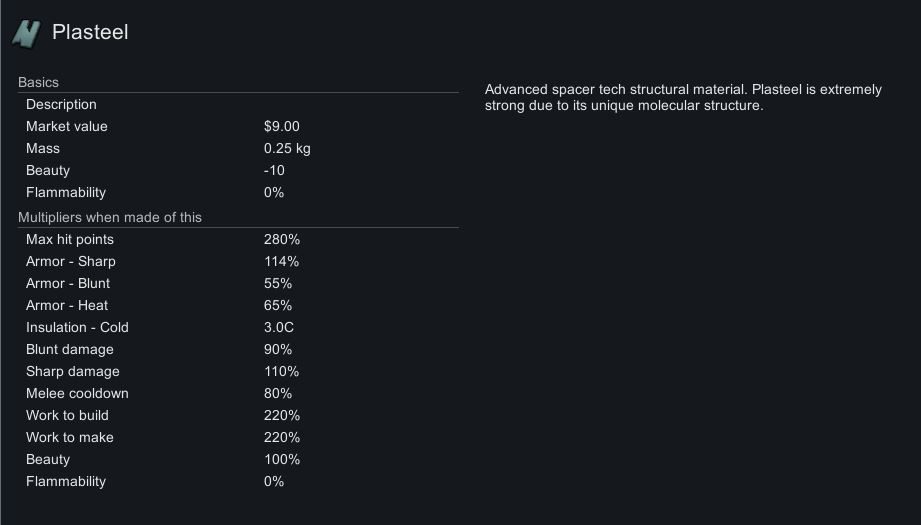 Apart from the fact that plasteel is the strongest and most durable material in Rimworld, there are many uses for it outside of constructions. Many different object require varying amounts of plasteel to create. The only problem is that plasteel is notoriously rare in the game of Rimworld and figuring out how to find a large amount can be a challenge at first. We are going to talk about some of the uses of plasteel and also some of the methods that you can use to find your own source.

Plasteel is more of a late-game item. That being said, if your colony is absolutely burning through the research trees you will find yourself in need of plasteel sooner rather than later on your playthrough. This guide on plasteel will go into detail about how to find plasteel in the Vanilla game of Rimworld. There are mods available on the Steam workshop that will change the game and create new, or easier methods of finding plasteel. We will discuss some of these options at the end, if you are still having difficulty finding plasteel.

How to find Plasteel in Rimworld

There are 5 different ways to get plasteel in Rimworld including:

(Tip: You can click any of the subheadings above to jump straight to a certain part of the post)

This is one of the easiest methods of getting plasteel and one of the simplest. This method will rely on some element of luck as compacted plasteel is not always guaranteed to spawn on a generated map area. To give yourself a a better chance of finding compacted plasteel be sure to choose the largest map size when generating a game world and colonize an area that has a mountainous area.

If you find that the area you have colonized doesn’t yield any plasteel after strip mining the entire area you can send colonist to different tiles on the map and have them create a new area there. There is an option in the settings which allows you to have multiple colonies. Simply colonize a new area on the map, mine any plasteel you can find and return the caravan to your main base. This is a simple rinse and repeat method for finding an almost limitless supply of plasteel on the rim.

The absolute easiest way of getting plasteel, like most other items, is to trade for it with other factions on the rim. Occasionally trading caravans will come through your colony looking to buy and sell items. Using your colonist with the highest social skill, select them and right click on the trader of the group to commence trading efforts. The only one in the group you can trade with will be marked with a ‘Question mark’ symbol above their head. You can use any colonist to trade, but by using the one with the highest social skill you will get the best deal out of the trade, as trade prices are directly influenced by a colonists social ability. Not all traders will have plasteel on hand. For example, tribal traders will basically never have any plasteel to trade as it is more of a late game item.

Send your colonists to trade with other factions:

You can also send your own colonists to trade with friendly factions via the world menu. Open up the world menu and select your settlement. From there you must set up a caravan and decide which colonists and animals will make the journey. Do not forget to include some silver or expensive items to trade away to the friendly faction as plasteel is quite expensive! Depending on how far away the friendly settlement is, you will find it useful to pack enough meals for your colonists and a few bedrolls to keep them in a relatively good mood for the journey.

Trade with passing ships through the Comms Console:

In the late game you will acquire a Comms console if you have researched enough tech. The Comms console will occasionally let you know that trading ships are flying overhead and you can trade directly with them. This will need to be powered. From there just send your colonist as you would with a trading party, over to the Comms console and interact with the trading ship. To sell and trade items from your colony you will have to also have a Orbital trading beacon set up in your stockpile.

Disassembling fallen Mechanoids to get plasteel

Defeated mechanoids can be disassembled into parts at the machining table. To do this, simply defeat mechanoids and make sure they are somewhere on the map that can be accessed by your colonist. All mechanoids will yield an amount of plasteel when disassembled. The amount of plasteel you gain will depend on how many body parts are missing from the creature you are taking apart. You may notice at some point in your colony you are warned of an ‘Ancient Danger’ buried within the side of a mountain or encapsulated by walls. This area has a chance of spawning either mechanoids or insects. One method of finding more mechanoids is to continually settle in new locations, open up the ancient dangers on the map, destroy the mechanoids, rinse and repeat. Exactly like you would with the mining method. There is a chance that your colony will also be attacked by mechanoids. If you manage to survive the raid you will end up with a small stash of plasteel at your disposal.

Through your research tree in Rimworld you will come across the Deep drill object. This deep drill, can be used to mine large deposits of plasteel found underground. You could technically use the deep drill randomly on the ground, attempting to find a source of plasteel but this is time-consuming and not recommended. You can create an item called the ‘Ground Penetrating Scanner’. What this does is searches under the ground for large deposits of ore, including the elusive plasteel. Once you find a good location, it is just a matter of putting your deep drill on top of the area, powering it up and assigning a colonist to drill. Colonists that have the ‘mining’ job selected will automatically drill from time to time if there aren’t any jobs more urgent. This is one of the best sources of Plasteel as you can find multiple ore veins under the ground in a single map area. One downside however, is that sometimes whilst using the deep drill you may have a negative event called a ‘small infestation’ appear. If that happens, you have randomly drilled into a nest of sleeping insectoids. Don’t worry, you haven’t done anything wrong, this is just a random event. If you are at the point in the game where you have deep drilling technology, a small infestation should be no problem.

One of the random chance events that can happen in Rimworld is a meteorite falls out of the sky. The meteorite will be a big chunk of ore that will fall somewhere on your map. Be aware it may also fall on your base if you are rather unlucky and anyone under the meteorite will be crushed. The meteorite can be any ore type in the game, including plasteel. You could have a meteorite made entirely of silver, gold, jade or even uranium! If a meteorite of plasteel falls on your map you will indeed be very lucky as this will drop quite a huge chunk of compacted plasteel for you to mine. The likelihood of not only a meteorite dropping, but also of it being made from plasteel are very low though. So if you need plasteel in a pinch, don’t wait for this event.

There are also some mods for Rimworld on the nexus or through the steam workshop, which add new ways to get plasteel. One such mod is the Craftable Plasteel mod found here. This eliminated the need for mega-bases to go out and search for plasteel and possibly become a plasteel supplier, selling it for profit.

That concludes our coverage of plasteel in Rimworld. If you have any more questions please feel free to leave them in the comments below.