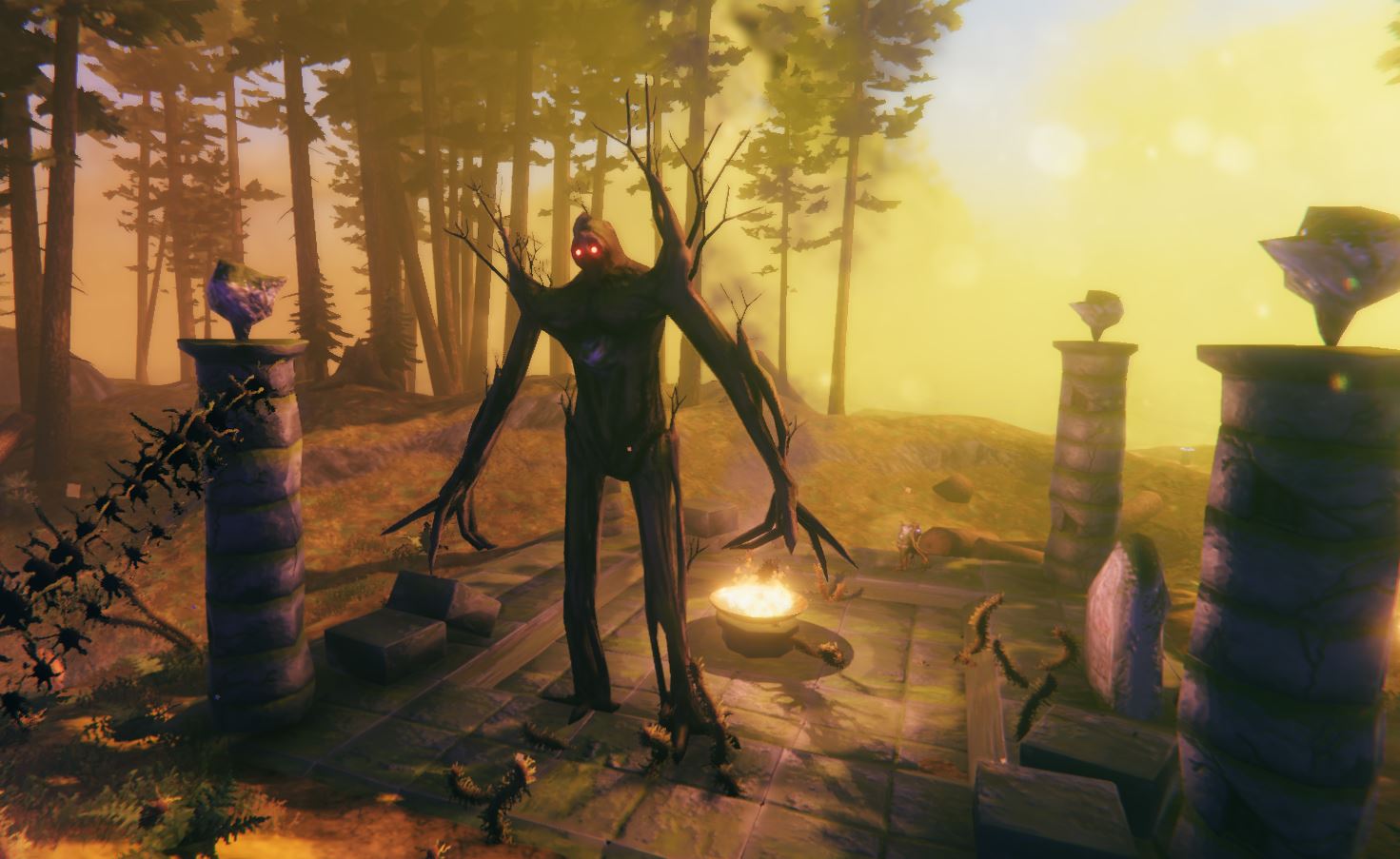 In Valheim there are a set of elder creatures which must be slain and sacrificed to the gods. These are Odin’s greatest enemy and the reason you were brought to Valheim upon your death on your home planet. The second boss that you will come across is known as The Elder. Upon defeating Eikthyr the large Deer Boss, The Elder will be your next great foe. This guide will detail how you can find The Elder, what kind of attacks he will use and give you some advice on how to beat him.

The Elder, as with the rest of the Boss battles will have to be summoned by placing certain items at their spawn altar. In Valheim every map is different. The game uses a procedural generation mechanic for the maps. As such I cannot tell you exactly where The Elder can be found on your map, but I can tell you how you can find that out.

You can check out our guide to the first boss Eikthyr, here.

You can click any of the headings below to skip straight to a relevant part of the page.

How to Find The Elder

Finding The Elder is not as simple as finding Eikthyr. Where a runestone to mark Eikthyr’s location appears at the summoning stones you will have to actually search to find the location of The Elder. You will need to find a new runestone that will mark the location of The Elder on your map. The Elder will be located in the Black Forest biome but isn’t guaranteed to summon in the Black Forest right near the stones. Where he will be is up to the random map chance.

To mark the area where The Elder is summoned on your map travel to the Black Forest. One you are in the Black Forest loot out for points of interest. The Runestone which is uses to mark The Elder’s location can be found either underground in the Burial Crypts or found above ground near small ruins. I have personally found a Runestone next to the stone towers which are randomly scattered across the Black Forest and guarded by Greydwarves and also down below the ground inside burial crypts. There is more than one runestone to mark the location of The Elder so you should find one after exploring a few Burial Crypts.

Once you interact with this Runestone you will see a location marked on your map for The Elder.

How to Summon The Elder

Like the other bosses in Valheim, The Elder will have to be summoned using items at an altar. There aren’t clear instructions on how to summon this character but this guide will break down all you need to know about summoning The Elder and fighting them. The inscription on the Runestone found at The Elder’s place reads “Burn Their Young”.

Burn their young is the cryptic clue found at the summoning altar of The Elder. To summon The Elder you will have to find and collect 3 Ancient Seeds and bring them back to this place. The Ancient Seed is hinted by looking up at the top of the pillars around the altar. You can see the model of the Ancient Seed carved into the tops of these.

How to Get Ancient Seeds

There are a few different ways you can collect ancient seeds in order to summon The Elder. Ancient seeds can be found by finding and destroying the purple Greydwarf spawners found throughout the surface of the Black Forest. These can be seed from afar and should be easy enough to spot. They will constantly spawn new Greydwarves to the area and generally be protected by advanced Greywarves like the Brute and Shaman.

Axes work quite well against these and fire damage is also good. You can even shoot them from afar with the bow so you won’t have to fight too many enemies at the same time. Once you destroy this monster nest you will be given an Ancient Seed every time.

You can also find ancient seeds as random loot throughout the Burial Crypts which we talked about earlier. The crypts, along with the runestone to register The Elder’s location, also has some loot chests generally located at the ends of the hallways. You can sometimes find Ancient Seeds in these chests.

Once you have acquired 3 units of Ancient Seed you have everything you need in order to summon The Elder. Simply walk over to the burning pit in the middle of the area and put the seeds in. You will have to assign the Ancient Seeds to one of the quick bar slots at the top of your inventory and press the corresponding number when at the altar.

This will consume and destroy your three ancient seeds and summon The Elder to fight you. Now begins your greatest battle yet!

How to Fight The Elder

The Elder is absolutely no pushover. This giant tree creature and guardian of the forest is a very large and very strong opponent. This creature is considerably harder to beat than the first boss Eikthyr and will take you a lot longer. Having more than one player would be advisable but the boss is even doable solo with the right preparation and knowledge.

The Elder is a land based character who moves by walking with his large tree branch legs. The Elder can move large distances quickly with his long strides but prefers to use his 2 ranged attacks instead of moving up close. This doesn’t mean you should fight The Elder head on though, as it has a devastating melee attack that does around 80 damage to someone without armor. The attack is very capable of one-hitting a player caight off guard.

If The Elder gets in close proximity to a player it will use it’s legs to charge up and stomp the ground. This stomp has a pretty large effective range around the boss and will cause major damage to the player. Trying to fight The Elder in melee range is not recommended due to this attack. It can be blocked but the player would need a great shield and blocking skill to negate all of the damage. It cannot be parried as The Elder cannot be stunned. The player can dodge roll away from this attack.

The Elder will use this attack if the player is far enough away from them. You will be able to see The Elder charge up for this attack as it will raise its branch hands to the sky before pointing them at the player. Black root-like objects spray from The Elder’s hands and will inflict damage to the player and objects around them. A good counter to this is to run to the side. The attack doesn’t have a very large horizontal spread and will mostly go over the target’s head. You can still outrun the attack by moving in the other direction but dodge rolling or sprinting to the side is advisable.

The Elder’s third and final move won’t directly damage the player. But that does not make it worthless. The last attack that The Elder is capable of is an attack that will spawn roots out of the ground that will attack the player. The roots will only attack the player if they walk close enough to them. These roots cannot move and will stay exactly where they are spawned. The roots will disappear if the player destroys them, or when The Elder uses the move again to spawn a new set of roots somewhere.

This is probably the easiest attack to deal with as once The Elder spawns the roots you can simply walk somewhere else. As you will be ranged attacking the enemy and on the move anyway this shouldn’t be too much of an issue.

Tactics/Methods of Fighting The Elder

There is a couple of tried and true methods that I have personally found when attacking The Elder that I’d like to share. To begin with, preparation is absolute key when fighting The Elder. Chances are that it will defeat you at least once so creating a small base near the enemy with a spawn point is advisable. If you have enough resources to craft yourself a teleporter which can be connected with your main base, this is also a good idea.

The Elder is weak to fire damage, being a tree and all. One of the best ways you can fight against this tree beast is to craft a whole bunch of fire arrows and shoot at The Elder from a distance with the Finewood Bow. You will need lots and lots of arrows to defeat The Elder so keep that in mind. If you plan on using regular wooden arrows you will need at least 150 arrows with a decent skill in Bows. The tactic here is to simply run far away and turn to shoot The Elder.

You can also make use of the area around the summoning platform of The Elder. The bosses ranged attacks will not be able to penetrate the pillars that surround the alter. You can hide behind these and come out only to shoot at The Elder. Another great thing about fighting near the platform is that every time The Elder walks over the fire brazier in the middle they will catch fire and take burning damage. You can add to this by crafting fireplaces for The Elder to walk on.

If you still cannot defeat The Elder there is another method which is cheesy but still works. By using the Hoe and a pickaxe you can manipulate the terrain. By doing this you can create essentially a trap for the elder. If you make a large enough hole with steep unscaleable cliffs you could trap The Elder in an are they can’t escape from. This isn’t really the Viking way but hey, as long as you defeat Odin’s enemies it’s kind of worth it right?

Loot Dropped By The Elder

By defeating the Elder you will have yourself one step closer to getting Odin’s revenge on his enemies. This is a very hard battle and you should be proud of defeating The Elder however you managed and however long it took. Once defeated, The Elder will drop 2 separate items as guaranteed loot. These items are The Elder Trophy, and the Swamp Key.

The Elder trophy will drop every time that The Elder is defeated in battle. This is the item that is sacrificed to the gods by taking it back to the summoning platform where you started your adventure. The item can be teleported so you can make use of a teleported near the summoning stone’s location. You can also put the item up as decoration in your house by placing the trophy on an item stand within your base.

Once you have gotten the trophy take it to the Sacrificial Stones and place it on the hook with the long tall rock. You can interact with this trophy on the hook to gain The Elder’s forsaken power. This power makes you cut down trees faster, a great skill for expanding your base area.

If you approach the trophy after hanging it on the hook you will have a message from The Elder to the player. The Elder remarks, “Little thing of blood and bone, I should have snapped you like a Twig! Now I wither and die, let the great tree have me…”

Another item that is obtained when defeating The Elder is the swamp key. This item is used to open tombs found within the swamp biome. This is where you are headed next on your adventures in Valheim.

Stay tuned for the next guide in this Viking revenge story as we move on to the third boss.