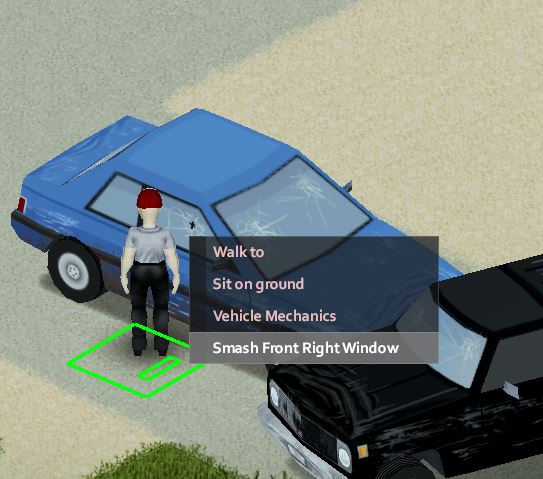 To hotwire vehicles in Project Zomboid make your way inside a vehicle and open up the Vehicle interaction menu by holding the ‘V’ key by default. There is an option at the top left of the radial menu which is called ‘Hotwire’.

Hey there survivors we are back today with another guide for Project Zomboid, the hardcore survival zombie apocalypse RPG. Today we are talking about hotwiring cars. To give players an instant start into hotwiring cars I’ve included a tl;dr above. If you are still having trouble getting access to a vehicle read on, as we will go into depth with images on how to drive vehicles around without ever needing a key in Project Zomboid.

To hotwire a car you’re obviously going to need to find one first! Vehicles can be found either at or near residential houses and buildings. The chance for a vehicle to spawn near houses is fairly rare so your best chances of finding a vehicle is to head to a local shop or store and go to the car park.

Most larger buildings like schools and gas stations will have a car park that should have at least 1 or 2 vehicles to try. Once you have found a car that you want to try to hotwire you have to get inside it! The first thing you should do after you find a vehicle is to make sure that the key isn’t just lying around. Sometimes you will be able to find keys by looking on the ground near a parked car. Often, keys can also be found by searching the glove box of cars, or lying on one of the passenger seats.

You can gain entry into a car without a key by moving near one of the doors. Once you are next to one of the doors, right-click it and select the option to smash the window. A top tip of smashing windows is that you should break a window that isn’t on the drivers side. If you were to smash the drivers side window zombies can attack you immediately when they come to the side of the vehicle.

Navigating to the Hotwire Menu

Once you get into the car you can hold the ‘V’ key by default to open up the vehicle interaction menu. If you aren’t there already, move to the drivers seat using the change seat option in the radial menu. Once you are in the drivers seat, open up the menu and go to the option up the top left which is for Hotwiring.

A quick way to raise your mechanics level is by reading the beginner mechanics skill book and just performing tasks on a vehicle like changing a tire or taking out parts.

An easy way to raise your electronics skill level is to acquire a screwdriver and take apart small electronics like watches and radios.

A Video Showing How to Hotwire a Vehicle:

In this video you can see a character using the burglar trait to hotwire a vehicle. This is the quickest way you can get a car in Project Zomboid. But be warned: anyone can take the vehicle if there is no key involved.

Another way to be able to hotwire cars early on is to simply choose the Burglar profession when creating a character. This will allow you to be able to Hotwire cars by default and absolutely no training will be necessary. This is a must-have for people wanting to get lots of vehicles early on without going through the training.

Now that you have a character that has either the necessary skills to hotwire cars, or is a Burglar you can attempt to hotwire any vehicle you have access to. To do this go to the menu and try to select the Hotwire action again. You will now see that you have the option to do this immediately and no requirement is shown on the option anymore.

Once you have successfully hotwired the car, providing it has fuel and is in good working order, you will be able to start it up and drive around. You will see some wires over the ignition of the car down in the UI.

Note that if playing a multiplayer game this will mean any other player can jump into the car and drive it away as the key is not useless. The car is not always able to be started and this can’t be undone currently. So Hotwire with caution folks.

That is all you need to know about how to hotwire a car in Project Zomboid. What is your favorite car in Build 41 of Project Zomboid? Do you prefer a fast sports car or something larger with better storage? Let me know in the comments below and stay tuned for more Project Zomboid content!