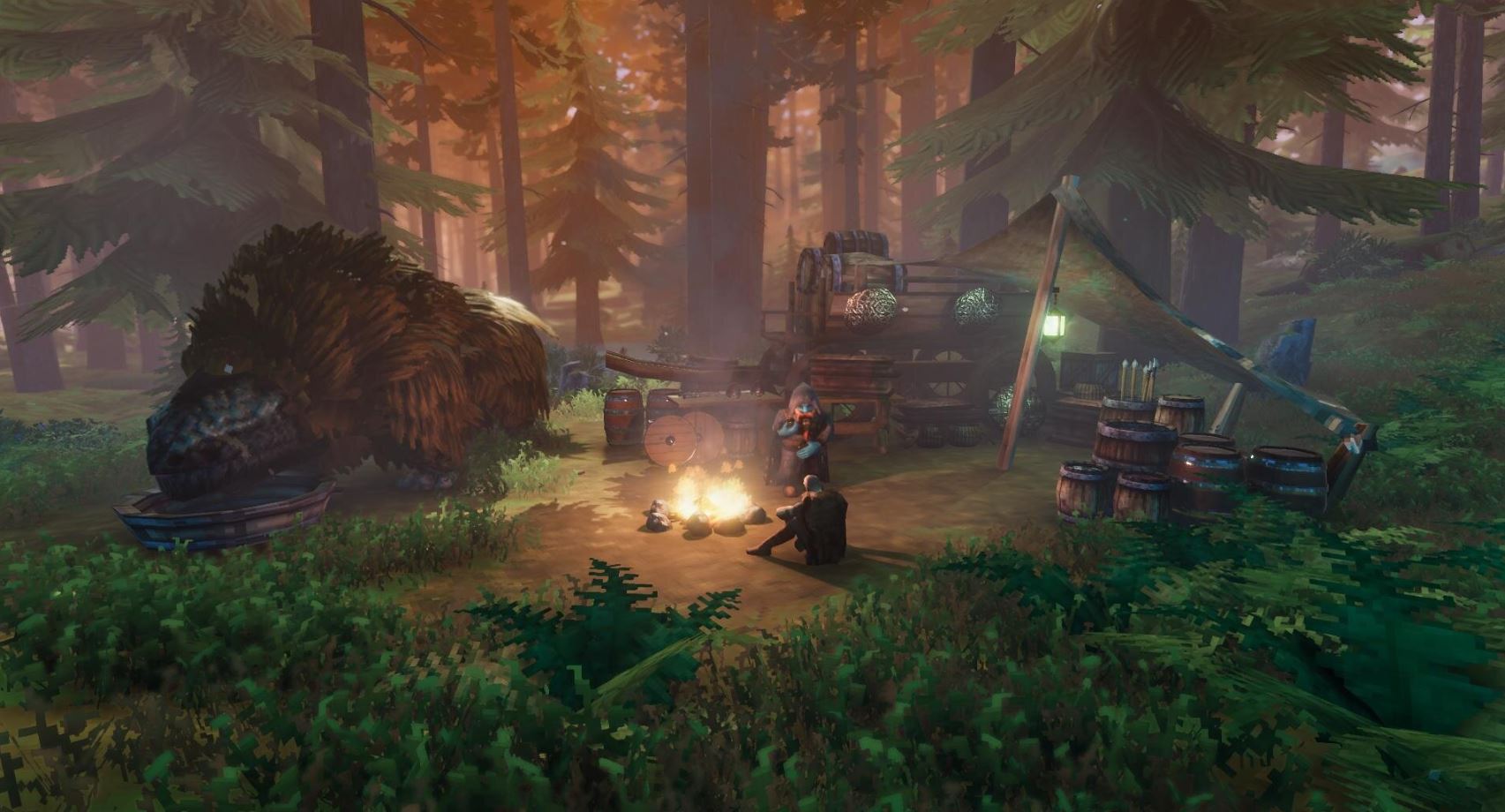 Draw your bows and ready your axes. Valheim is finally upon us! Bring order to the 10th Norse world of Valheim in this procedurally generated hardcore survival exploration game.

Valheim has all of the things that you might think when you think Vikings. From humble beginnings hunting deer and creatures to earn leather to craft, to battling large boss creatures your adventure will take you from nothing to Viking legend. Well, if your can survive the adventure that it.

Valheim is a procedurally generated survival game with a large focus on exploration and discovery. Each time you start a new game in Valheim you will begin on a completely different world. The world uses different seeds to generate the maps. (Think Minecraft). Those who have played a few games in the survival crafting genre will see some similar features to other games. The game shares a lot of similar mechanics to other games without seeming like it is merely just another copy. We are going to firstly talk about the game world of Valheim and what you can expect from this Viking simulation.

I have been playing Valheim for over a week or so. I will share my personal experiences with the game and try to give you an idea of how I found the game.

The world of Valheim is centered around one large map with many different biomes. Minecraft players will be familiar with this type of game world. One of the standout points for the game, for me is the beautiful pixelated graphics. Some games can seem as they are trying too hard to create this indie, pixelated old school feel but in Valheim the graphics really do work amazing with the setting. The contrast of the washed out color palette of the objects in the world with the graphical light bloom effects work really well. They went with a stripped back graphics approach clearly to work on other mechanics and aspects of the game and I think it has worked very well in their favor.

The forest is lush, full of fauna and flora, the snow feels cold. What the game world lacks in realism, it makes up for with stylized pixel effects. The ease of the graphics makes the smooth motion of the trees shaking in the wind, and stones rolling down cliffs look great. The character models aren’t particularly detailed with my character sharing the same expression whether he is cooking up a deer leg on the fire, or facing his greatest enemy on the battlefield. Given that it is an early access game it is still being worked on. One of the things i’d really like to see out of the early access development is customization and personalization options with characters and gear.

Valheim, as aforementioned shares a lot of similar features with other survival games. Although the progression system innovated the genre in a few different aspects I will talk about below. The starts fairly simple. Pick up wood and stones and start to build your first small house and bed. Gradually as you start to build more things and progress through the game you will find stronger, better materials to make stronger better items.

Valheim is an open world game with a focus on exploration but that doesn’t mean that there isn’t a set goal. Your goal, in Valheim, is to bring order to the 10th Norse world. You will do this by hunting down and defeating Odin’s greatest enemies and offering their trophy’s to the gods. As you progress through the different enemies they will get stronger and stronger naturally. To stand a chance against these boss creatures you will find yourself hunting for new materials to craft better gear.

Item crafting and grinding for resources is a fairly time-consuming task in the game. The game is absolutely achievable and still great fun as a single-player experience, but those looking to progress a bit quicker or needing help tackling those tough enemies will be happy to know that you can host your own multiplayer servers. You can host your own servers through the in-game menu so that you and a bunch of friends (1-10 is advertised on the game’s page) can hunt down Odin’s enemies and feast together!

Valheim is a slow-burner. That doesn’t mean you won’t enjoy it if you’re a fan of adventure games, but it does have its moments where you will be running through the woods looking for a specific enemy to kill to grind resources for an item. Fans of survival games will feel pretty at home now. If you aren’t a fan of the skill and resource grind, you might feel a little bored with this one. Alternatively, you could always find a couple of friends who do like to grind materials and treat yourself as only a warrior.

Naturally you will have to fight at some point in the game. Valheim features a few different combat systems in place which are easy to learn and also relatively easy to master. Although I haven’t faced a large number of boss creatures yet in Valheim, I have already faced quite a few different opponents. There is already a pretty good variety of enemies to face in Valheim, from simple creatures to hunt, such as Boar and Deer, to enemies facing a greater threat like the Greydwarves.

The Greydwarves are a monster group which exist as part of the game’s lore. I have only experienced a handful of the biomes and areas in the game but the Greydwarves stand out as one of the more interesting enemy types. At first, they seem simple enough to beat when you fight one of their smaller members, the Greyling. But once you start to advance in the game you’ll discover there is more to the Greydwarves than meets the eye. For example in their race alone I have encountered the Greylings, as aforementioned, a more advanced Greydwarf with a ranged attack, a shaman who will heal their kin and attach you with poison and a Brute, which as the name suggests, is a larger enemy with a big club and big health pool.

They may prove to be hard at first but once you start to understand their attack patterns you will learn good methods of fighting them. For example as a runestone within the game explains, holding a torch out at night will prevent the Greydwarves from coming close to the player.

I want to talk a little about my favorite aspect of the game now, the boss fights. The main goal of the game is to hunt down the greater enemies. These are greater mystical being which are genuinely tough boss fights. I had absolutely no idea what I was facing when I took two deer trophy’s to a mystical altar I the forest, but when I encountered was something really special. The sky turned grey, heavy chugging guitar slowly faded in, thunder came closer as a large deer-like creature with thunder sparking from it’s horns materialized in front of me. I was instantly hooked. The boss battles in Valheim are absolutely awesome. The game really makes you feel like a badass Viking. It doesn’t waste time and effort creating this fully immersive, realistic experience. It doesn’t take itself too seriously and that is what makes this game really set apart from the rest. Blocking to reduce some of the damage from the thunder attacks, rolling out of the way, getting a strike of two with my wooden club when I can. Boss battles are awesome. I’ve written a guide on the first boss, Eikthyr, which can be found here.

The sky turned grey, heavy chugging guitar slowly faded in, thunder came closer as a large deer-like creature with thunder sparking from it’s horns materialized in front of me. I was instantly hooked.

It’s Only the Start

This is only the start of my journey. Rather fittingly, this is only the start of Valheim’s journey as well. The game is still in early access meaning it is still in development. At the time of writing I have spent over 20 hours in the game world and am yet to beat the second boss. Don’t let the early access tag fool you. There is so much to do already in Valheim. If you choose to purchase Valheim, you will be receiving a full, fun and rewarding Viking experience. You can build structures of your dreams and fight great battles. Not only that, but you would obviously be supporting the development of a team that really seems like they put their heart and soul into a game.

You can see the passion behind the game in every small lore object, dungeon and enemy. The game so far is a great lot of fun and I’ve found myself not only just playing it to get footage and for the sake of writing this review, but I can see myself playing and enjoying it for quite a while longer. The game draws you back in with the knowledge of the next big fight waiting around the corner.

Should I Buy Valheim?

As with any game I would recommend checking out the Steam page, reading the general reviews and checking out gameplay on it before committing to the game. I can sit here and tell you how cool it is to built up a castle, crop down huge creatures and sail the seven seas with your Viking buddies but if that isn’t the kind of gameplay experience you’re looking for then that’s totally fine. Survival exploration games aren’t for everyone, but if you have played games like, Ark, Minecraft or Rust and enjoyed them and like the Viking theme, then I’d say Valheim could be a game for you.

During my gameplay I haven’t encountered any game-breaking or even save-breaking bugs. No game is perfect, especially ones that feature procedural generation but honestly I’ve had a very smooth experience from the start.

If you’re looking for a great game to play with where you want to feel like a badass, Valheim is for you. It shares similarities with other games of the same genre but manages to define itself with a unique and beautiful art style and very clear direction. The game doesn’t share the same identity crisis issues we’ve seen with other survival games and the early access release rewards the purchaser with a full, fun, rewarding experience whether playing with friends or alone.

Valheim in early access isn’t just a building block to a complete game, it’s the whole building with plans for multiple extensions.

Related: Everything We Know About Kenshi 2 | Kingdoms Early Access Review

5 thoughts on “Should I Buy Valheim? – Valheim Review”