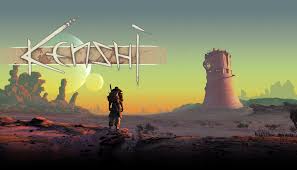 Kenshi is a single player cRPG game developed and published by Lo-Fi Games. This Kenshi review is from someone with hundreds of hours over multiple years. The game has seen years of early access on Steams early access program. The game officially was released in December, 2018. These days, I find myself jumping from game to game, not being able to really get stuck in to a game or new world. I think part of the reason i find myself struggling to stay is the lack of new experiences. Sure, there are a lot of genres and sub-genres of games out there. But there has been a long time since I played a game and felt truly like I was in a new experience in video games. Until Kenshi.

Crawl limbless through the desert and have fun doing it

Kenshi is a game in which you will find yourself in a constant uphill struggle. No person in this world will hold your hand. You won’t be given a few hours of tutorial on how to move and buy items and eat. You are simply thrown into this wasteland to figure your way out. Kenshi will have you, at times questioning why in fact you are still playing the game. It will have you wondering, ‘am I really having a good time here watching myself get constantly beaten half to death and be captured by slavers?’ And the answer is yes. Everybody loses. This isn’t a game where you will run and gun through the lands, completing quests and saving lives. You will lose. You will be beaten to a bloody pulp and have to scratch together some means of money to eat before you starve. You may even have to sell the shoes off your feet just to grab a block of nutritious food. THAT is the beauty of Kenshi.

Kenshi has fantastic reviews all across the board. It isn’t a particularly beautiful game, It doesn’t have anything amazing in the way of a story but somehow it just works. Kenshi dabbles across a few genres; Base building, survival, RPG, but doesn’t ever seem to lose sight of what it is that makes it beautiful. The game is a slog-fest. It is a true sandbox experience of you running through the desert truly going your own way. it gives you plenty of freedoms of which factions you want to join, who you want to be, and essentially what you want to accomplish. I love the game and it was about time I made my own Kenshi review. So, let’s start at the start…

You begin by picking from one of a few different starting scenarios. You pick will decide how difficult the start of the game will be and where you will begin. You are capable of creating some freaking monster through the character editor and set off on your way in the world. What do you do next? Well that’s up to you.

Wow this cRPG looks like a real…. Wasteland… But this is a Kenshi review not waste…. oh never mind

Your starting location in the game will be picked at random from the games huge map. Seriously, Kenshi’s map is massive. The game is split up into very interesting and diverse pieces. Over on the North East you have The Great Desert which is controlled by The United Kingdoms. They are relatively nicer than most other factions, not attacking on sight and even helping out strangers sometimes. Though, they still have slavery laws in effect and will attack if you try to bring contraband into their cities.

Speaking of, there are 5 main factions in the game. The United Cities as aforementioned, the Western Hive, a hive of insect-like humanoids all with a hivemind connected to one-another. you have the Holy Nation who are your religious nut-jobs who will attack on sight if they don’t like your race. (Yes really). You have the Shek Kingdom which is made up of Humanoid people with horns who love to battle and take great pride in their fighting ability. Then last but not least you have the tech hunters. They guys are obsessed with the old technology of the past and are always roaming the ruins of the map in search of their next great treasure.

Fight for your sad life!

Combat in Kenshi is in real time, meaning there aren’t any turns. A proper Kenshi review could not be written without stating the fact it is a hard game. You may even find some people and creatures attack you on site, depending on where you are, who you are and how you have interacted with other people in their faction. Maybe you are an escaped slave from a nearby slave camp. Just because you got away from the camp and made it back to a city, doesn’t mean you’re off scot free. Slavery is legal in Kenshi and if you are designated as a slave, you’re going to have to find a great disguise if you’re going to hide out in a city. In this case it’s best just to lie low and avoid any kind of contact with other NPCs. unless of course you can handle yourself…

Kenshi has a stat’s system with the ability to make yourself better at pretty much everything in the game. You won’t gain experience for every kill however. As in reality the way you get better at things is by doing them. If you want to improve your ability with katanas then you will have to go out and find something to hit with your katana. If you want to get better at sneaking, sneak around the town at night, trying not to be heard. If you want to get tougher. Well that’s another thing. Your toughness will increase every time you take damage and you will get an even better EXP boost if you are knocked out. Kenshi, if you hadn’t already figured that out is not your conventional game. You will fight, you will lose, some of your people may die, but that’s how it is in Kenshi.

Build it up and watch it burn

The base building aspect in Kenshi adds a whole new level to the game. To review Kenshi’s base-building a certain point of view is needed. I have played a lot of base-building games and I could not say in my Kenshi review that it is the cornerstone base-building game of the genre. But that being said it is completely optional. As with most things, you decide what you do and where you go. The base building includes being able to make your own residential building for your squad and also some industry. You can build a research bench and a few different industrial crafting objects as well. This includes the ability to grow food and cotton crops, process the fibers on a loom and make clothing to sell for those hard earned cats. (Sounding a little like Rimworld?) You can have multiple squad members, (usually randomly generated) generally found in bars and around towns. You can also find some unique NPSs who will be there during every gameplay. BEEP. They can then be given automated jobs to do in your base, like guard this spot or farm this field and deliver the food to X. The base building in Kenshi is well thought out, rewarding and let’s you be as creative as you want. But don’t let that make you think it is going to be easy. Depending on where you chose to set up base you will always have someone that wants a piece of your action. Setting up in the united Cities incurs a land tax and failure to pay this will have some not so friendly samurais come a’knocking. You may find yourself having to fight off some hungry bandits or possibly even cannibals, so choose your home location wisely and make sure you are ready for the outpost life!

The game features a large array of fauna and flora for you to discover and possibly purchase. One of the starting scenarios teams your hungry survivor up with a bonedog puppy for you to take care of, grow with, and hopefully not have to eat. But, it’s a tough world out there in Kenshi and that means tough decisions have to be made. There’s no use buying 15 goats if you can’t even feed yourself. Unless of course you use these 15 goats to raid a passing trade caravan….

If all this talk of friendly goats and bonedogs is making me let your guard down stop here. There sure is enough dangerous fauna in the land. From Beak Things to Gorillos, Giant crabs and something called a Leviathon, (it is as bad as you thing), you always need to have your guard up when travelling.

A sandbox experience not to miss

To review Kenshi in a few words, Kenshi is a true hidden gem of a game. It is a game I took too long to review. It it, to me, a true sandbox experience. While many games in the genres try to put their hand in too many jars, I feel like Kenshi is a perfect blend of all the genres it encompasses. The combat feel real and rewarding and the time I spend in the game actually feels like I’m getting somewhere, even if i am constantly losing battles. I don’t find myself searching for any kind of direction when playing. The game has a great flow and leaves you wanting to come back for more every time you can manage to put it down.

Kenshi is a fantastic example of what can go right in early access. It is a sandbox, base-building, squad based, cRPG which never truly forgets what it is. And what it is, is a fantastic game. You can find the game on steam here. It has been an honor to write a Kenshi review as i adore the game. It really keeps me coming back and back.