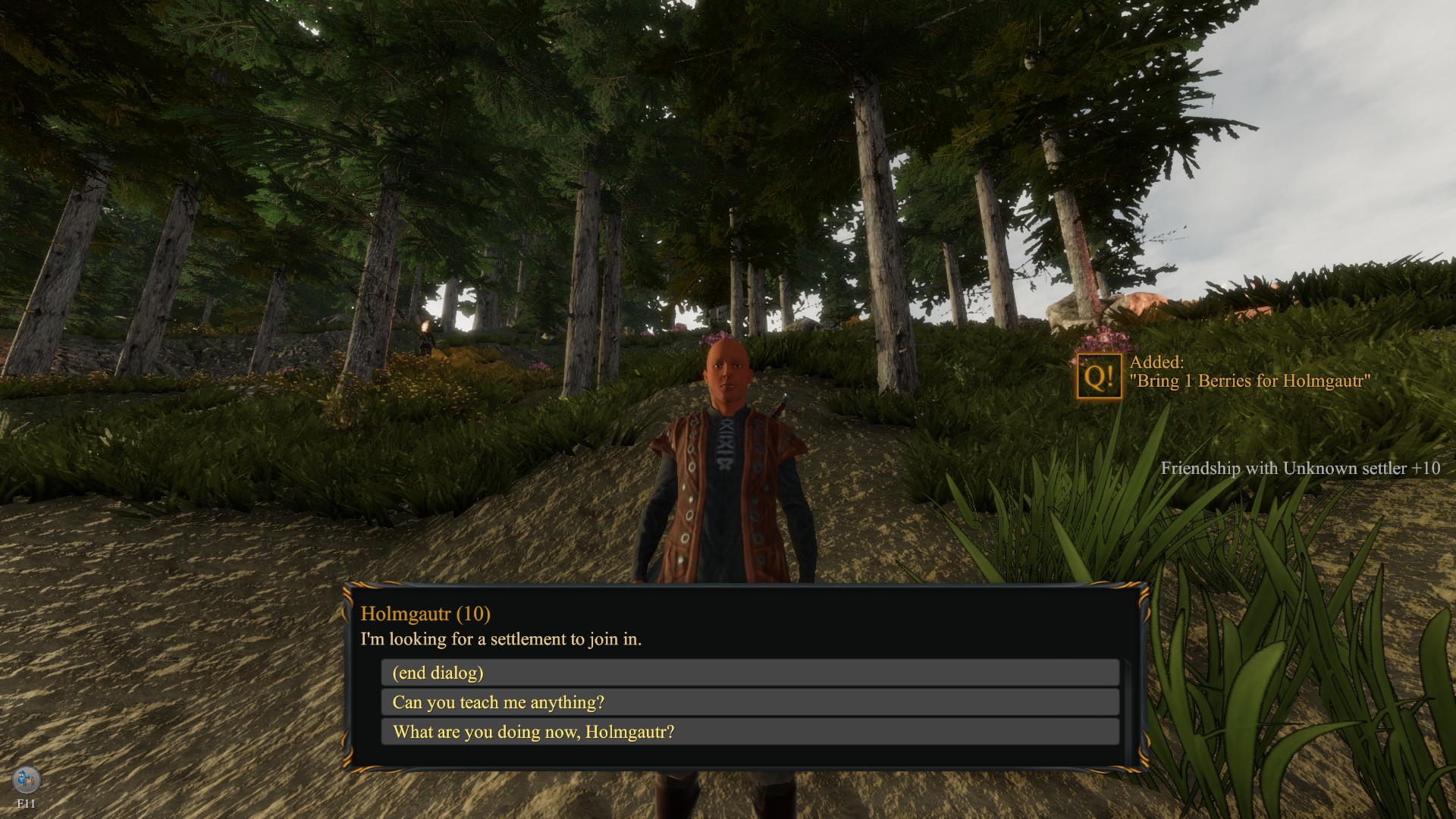 We review the Steam game; Kingdoms. Become a Medieval property tycoon in Kingdoms

Disclaimer: The game being reviewed is in early access meaning it is subject to change. The game has been reviewed in its current state as per the date listed in this article. The game was purchased in full from the reviewer.

Kingdoms describes itself as a Procedurally generated Medieval RPG. The game boasts a ‘smart AI’ feature where every NPC has their own motives and actions. The main focus of the game being the dynamic world to be immersed in. Is is a first person game of exploration and construction.

Kingdoms features an ever evolving, ever changing world. From the get-go the player has the option to choose either an empty world, arriving fresh off the boat with around 15 other NPC’s to forage and build together. Or you can pick an already populated island, with it’s own NPC’s, settlers, traders and major factions already in place. After moving through the world settings and sliders you’re greeted with a fairly in depth character customization menu.

The character customization system is fairly deep, providing sliders for body and face attributes. You also have a few skills to allocate which are fairly straightforward and with a mouseover you can see what each one does. But once you’ve created your perfect medieval landlord it’s time to move onto the world.

The game controls like a lot of other RPGs. The game is played from the first person perspective. At this point you are on your own. I use on your own very loosely as when you start there should be a few other NPC’s to talk to and see what they are up to.

Following your exit from the boat ramp you will enter an island either populated with many different settlements or a completely empty vast landscape.

From here you can choose whatever you want to do. Perhaps you want to be a farmer, living just outside a major town, tending to your fields, buying what you need from inside the safety of the walls. Maybe you want to be a world-renowned bounty hunter, travelling the countryside, ridding them of bandits. Or, maybe you want to take arguably the best approach and build your own community. The choice is completely yours.

You can start your own settlement and if you build some houses the settlers will come! Simply set up a settlement with a noticeboard and a few communal buildings and when people are searching for a settlement they may come to you! You can also fast-track this by searching out NPC’s and convincing them to come and stay with you. From there they will find a spot to build their house (if you allow that) and cut their own wood and build a house for themselves, if you haven’t made one available.

The settlers can then be taxed and as you build more structures your town increases. Other kingdoms may declare war on you or start an alliance. The system at the moment is not so complex as it is currently being worked on. But the game is being updated every other week and it seems like the developers really want to actively work on making it a better experience. The game is called Kingdoms. I mean you kind of get it when you see a game called Kingdoms on Steam. You make a kingdom.

The combat is not very deep at the moment and lacks any great animations or particle effects but it is there, and it works. There isn’t too much to say about it. There are health bars, click when you’re in melee range or aim your bow at an enemy, they will be hurt. Honestly the game falls a bit here but the basics are there in place and i am sure it is something in the works. You may strike any NPC at any point but killing a passive NPC will result in you losing global reputation, or possibly your life if you pick the wrong person!

The sound design in the game is quite nice, with my favorite parts being the beautiful menu music you are greeted with that really speaks to me on a level where I feel like a noble about to tax some poverty stricken peasants. The sounds are nice and really can make you feel immersed in the game, even if the graphics don’t.

The graphics are fairly basic, even on higher settings. If you are expect crysis level graphics then i am very sorry to disappoint you. The models are somewhere between Oblivion and Witcher level with the random generation sometimes creating some nice faces, or some horrific looking fish people with eyes popping out of the head.

In my opinion the game at the moment plays a lot like a tech demo, which isn’t really a bad thing. I did have a lot of fun playing the game, levelling up my settlement and building houses for my little virtual peasant friends. The grind level is fairly large but it is a rewarding experience to see your kingdom come together.

“Should I buy Kingdoms on Steam?”

Kingdoms is a game that tries to do many different things but seems to struggle defining itself in any area leaving many of its features seemingly unfinished. Though Kingdoms is a game available on Steam it is still in early access. It is a fun demo, all the same and if you appreciate this time of game and want to aid the production then by all means try it out. The game goes on sale fairly often on Steam and is a nice little town builder as is and is being frequently updated.

Whilst Kingdoms does lack a lot of features and gameplay it is a great little support for what is no doubt going to be a great game. Kingdoms Steam game is constantly being updated and I am looking forward to seeing where the developer goes with the game. You can buy the game on steam here.