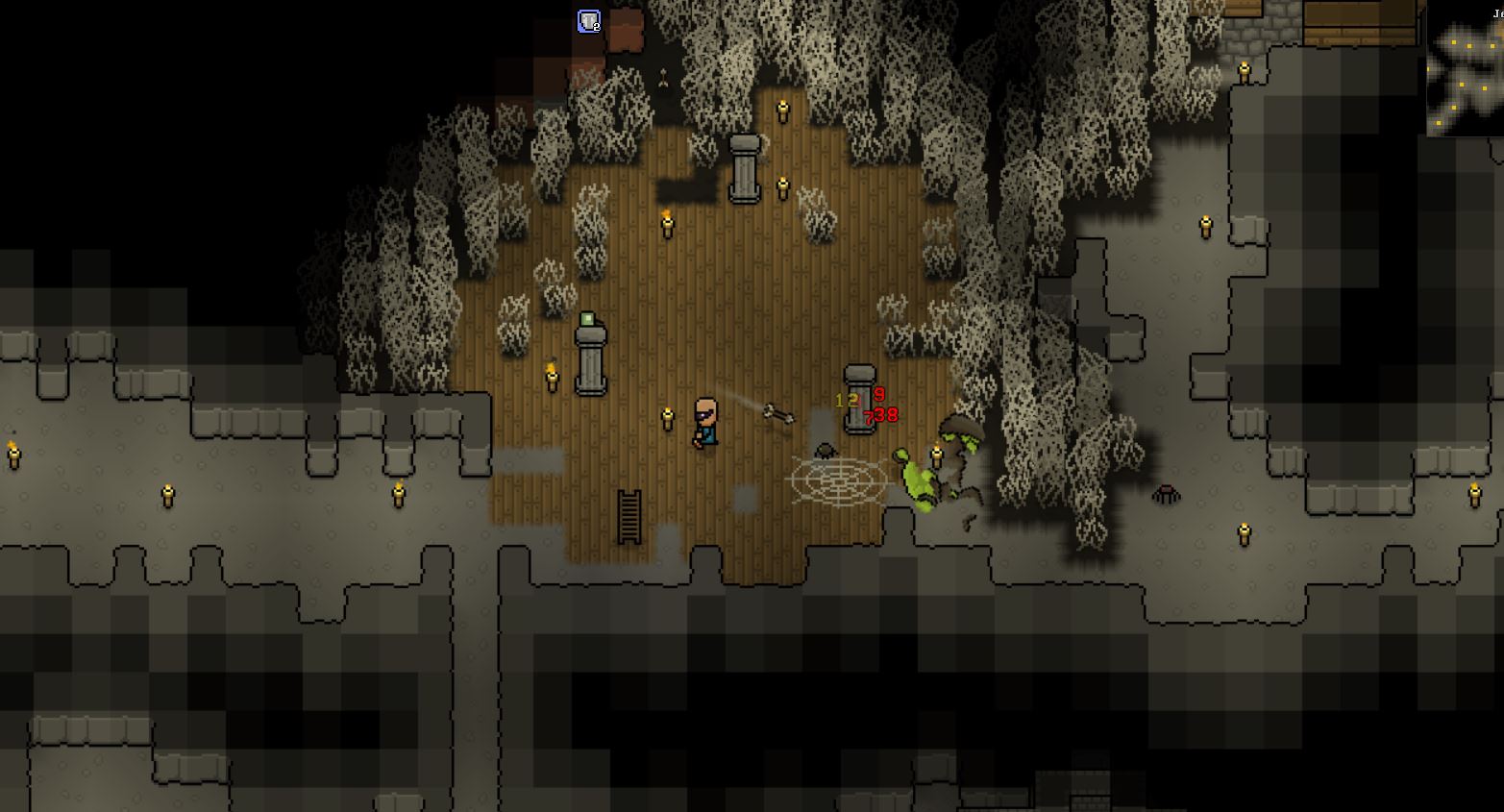 Necesse is an indie, open world survival crafting game available for the PC on Steam. In Necesse you will find yourself exploring a large procedurally generated archipelego of islands. You will craft, harvest resources and fight difficult creatures to progress in the game. This page will give you some of my personal top 10 tips and tricks for the game.

Whether you’re a beginner, playing Necesse for the first time, looking to purchase the game or someone who has already sunk many hours into the game you are sure to find some helpful information here. There will be combat tips, crafting tips and also great shortcuts to learn.

Tip 1: Get a Head Start, Take Items From the First Chest

When you start a new world in Necesse you will begin on an island with 1 NPC. This is The Elder and they will; guide you through the main quest-line of the game. You will also start next to a small house with some things inside. Before you start your journey off into the world you should take a look in the chest and loot all the items you can from here.

There are a lot of great items in this chest such as a settlement flag and some food items to keep your hunger sated. Beyond just looting the items in the chest, you can also remove the furniture. It’s a good idea to loot the bed as well and place it down somewhere you want to start building your settlement. It can be a bit of a pain to collect wool to craft a bed at the beginning of the game.

One feature that sets Necesse apart from similar survival crafting titles is the ability to start up your own settlement. Once you have a settlement up and running you can ask NPCs to join your town, You will need to provide them with a house, bed and some furniture. This isn’t as much of a burden as its sounds as they will repay the favor.

In return for staying in the settlement, NPCs will also work . This can include cutting down trees and collecting wood, fishing for a free food source or even crafting items that you specify. Once you have a settlement up and running you can mark areas to be used as a Forestry area. NPCs assigned to the woodcutting job will automatically replant trees and harvest ones that have grown big enough to cut. You can even assign specific chests to be used as wood storage.

To begin automating jobs, press the C key to open the settlement management menu. Under the option Assign Work you will find Assign forestry zone. Paint an area with this zone and it will become the designated place where villages harvest wood. You will never have to go through the task of collecting wood yourself again! You can check out the video above to learn how to set this up.

As Necesse it a survival game, there may come a time where you are defeated or perish from hunger. When this happens, depending on your settings, you could lose all of your items. There is an item called the Recall Scroll. What this does is teleport the player back to their spawn point (bed).

You can use this from any island as there is no maximum distance for this to work. This can be great if you’re far from home collecting resources and don’t want to travel the whole way back on foot. Remember to keep at least a couple on you at all times.

There are a few different biomes that you can explore in Necesse. As you’ve probably seen there are desert islands, snow islands and also swamplands. One cool aspects is that these different places have different resources that the player can find. Apart from having different types of wood to build different styles of furniture, there will also be new enemies, materials and items to discover.

Even when you build a ladder down to the caves of an island, this cave will be different too. Be careful when exploring though, as the game will get more difficult as you move through different biomes. If you dfind yourself getting overwhelmed by new enemies, don’t be afraid to recall home, build up some new armor/weapons and head back at a later date.

Like a lot of other games that focus on moving loot around, there are shortcuts to cut out unnecessary time wasting in Necesse. Here are a few helpful shortcuts you can use to help manage your inventory better:

From time to time you will have visitors come to your settlement once you have it up and running. Some of these visitors will be traders looking to sell you some unique items and tools and others may be NPCs looking for somewhere to call home.

Another type of NPC that can come and visit your settlement in Necesse is the Pawnbroker NPC. This NPC will buy any item in the game from you. Depending on the quality and rarity of the item, you may fetch a better price than you think. It is a good idea to keep a chest in one location with items that you either want to trash, or sell for profit.

You can even sell crafted items like walls and furniture to this NPC. Everything is worth coins. Just be sure you actually want to get rid of the item before selling it as once it’s sold, there’s no going back!

Tip 7: Start of With Ranged Weaponry

To begin with in Necesse, you won’t have a lot of health. As you progress through the game and defeat some bosses, you will get some more total health for your character. That being said, the base level of health is quite poor. You will find yourself at a significant advantage however, by using ranged weaponry in the beginning. As most enemies area melee or short-ranged, you can at least get a few extra hits on them by crafting either a bow or boomerang, or using some of the many throwing weapons.

Ninja start are very common in the caves of Necesse. Don’t be afraid to use them up in the beginning of the game as eventually you will find weaponry that will outrank them anyway.

It may be obvious that you can craft your own armor to give yourself a bit of an advantage in Necesse. The main reason to craft armor is to raise the defense level of your character, making them harder to defeat. A lot of armor pieces also have interesting perks to go with them as well such as being able to have one more summoned creature along.

There is another item called trinkets which can also be equipped to the player. These trinkets provide extra bonuses to the player’s stats when playing the game. There are many different types of trinkets you can uncover and they will also have different grades. Just like weapons found as loot they will have similar prefixes like Sturdy or Precise giving them an extra stat boost.

Trinkets can do a number of things for the player such as boosting base movement speed, critical hit chance and even other bonuses such as the Polar Claw. This item can be obtained by defeating a polar bear in battle and will slow enemies movement speeds when the player hits them. Great for those speedy boss battles.

Throughout your progression in Necesse you will have to fight powerful bosses in order to progress through the game. You will often find yourself at a huge disadvantage as the bosses shoot endless attacks in your direction dealing devastating damage.

One thing that can turn the tides in your favor is potions! Potions can be crafted by the player using different ingredients at the Alchemy Table. Here you will find a large range of potions with different effects. You will also find potions as loot in the caves of Necesse. Make sure to actually use these sparingly, as they can be a huge help when fighting a difficult boss battles.

One of the best things about using potions is that you can drink multiple potions at the same time to stack their abilities. Meaning you can have the speed, health regen, attack damage and all of the rest working at the same. time. Hoard up a bunch of potions before you next big boss battle and see the effects for yourself. A nice speed potion can help you dodge enemy attacks better!

Of all the different items available in Necesse I’d have to say personally the summon feels the strongest. Using a summoning item you can summon small creatures to aid you in battle. To begin with you will only be able to summon 1 creature at a time, but through equipping different gear you can raise this.

Summoned creatures will fight by your side and will automatically attack any nearby enemies. You can summon melee and ranged creatures to help. Enemies will completely ignore any summons you have around you. They are also invincible until you decide to get rid of them. In fact, you can summon the creates, get out your other weapons and fight as usual.

There is no real downside to having summoned creatures fighting with you. you should at least try to collect one summon weapon and have a summon aid you in your fights. You can check out a guide I wrote on summons in Necesse here.

How did you find the list? Are you enjoying the challenge of Necesse so far? Do you have any other tips or tricks that players may find helpful in their playthrough? Leave a comment down below.