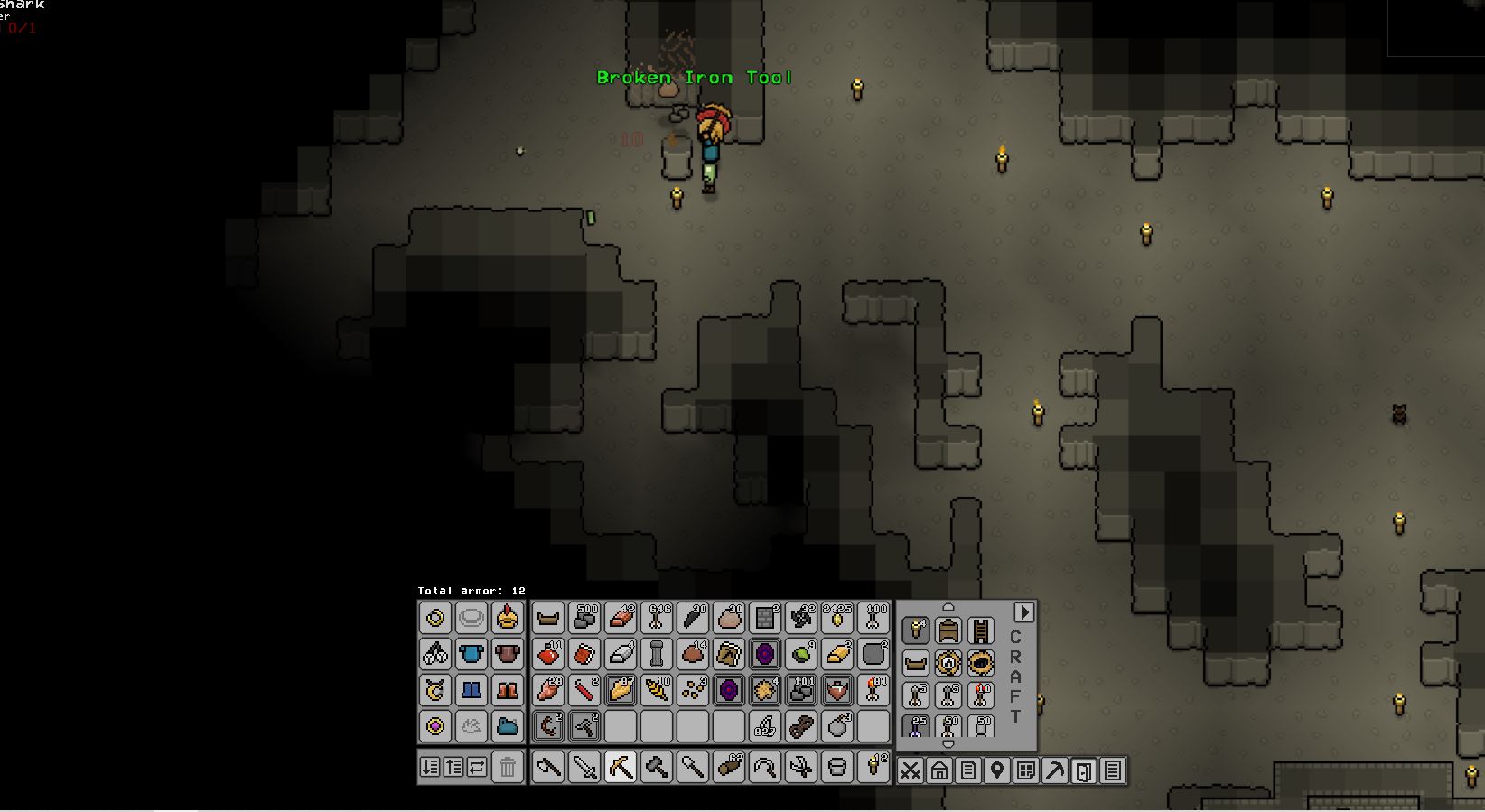 Once you’ve moved on from collecting copper in Necesse, the next tier of metal is going to be Iron. Iron is one of the metals that you will be using to craft a large range of items. The world of crafting in your settlement will really expand once you get your hands on some Iron.

This guide will show you how to get iron, where to find it and some of the things that you will be able to craft once you get some iron bars. Without further ado, lets dig in to iron in Necesse.

Where to Get Started With Iron

As with copper, you are going to find iron under the surface. Firstly, craft yourself a Ladder Down by putting together 10 wood logs in your inventory. This will be how you get down to the underground save level where the iron is located.

Once you have crafted the ladder down simply place it anywhere on the map. The Ladder Down will unsurprisingly be used like a ladder to get down to the underground level where ores area found. The ladder Down has an unlimited number of uses. You can also pick up and move the Ladder Down by hitting it with a tool once placed.

Another tool you will need to get iron is a pickaxe. It doesn’t matter if that be a wood pickaxe (you should have started with one) or a copper pickaxe which can be crafted at the Anvil. The better the tool however, the faster it will be able to get ore. That being said, a Wood Pickaxe CAN get iron as well.

Now that we have a pickaxe and a way to get underground, we are able to start looking for iron!

How to Get Iron Ore in Necesse

Take your pickaxe and head in the Ladder Down. Now that you are down in the caves section of Necesse we are going to start looking for some iron ore. Iron ore is found within rocks in Necesse. There are very distinct rocks however, that have ore inside them. Look for the rocks like the ones that you can see in the image below and start using the pickaxe on them.

Great! You have found a good amount of Iron ore you can head up to the surface again to get started crafting it into iron bars. Iron Ore is completely worthless on its own. There are no crafting recipes which utilize iron ore just by itself. Any time you get any iron ore, it’s best to just turn it all straight into iron bars so you can craft with it.

After we have brought all of our haul back to base it’s time to get blacksmithing. Iron ore is processed into bars by using the Forge tool. This is a piece of furniture that will be placed down somewhere on the ground. You can place the forge inside or outside of a building.

A Forge can be crafted at the Workstation by using 20 stone. By now you should have a nice large stack of stone from mining all of that iron ore. Take your iron ore stack and head over to the forge so we can start to create some bars with it! Right-click on the forge to open up the forge crafting menu. You should see the screen below.

All you have to do now is place some wood on the left side of this menu. This wood will act as fuel to heat up the furnace. you can’t melt metal without a little heat! Don’t worry, you won’t have to cut down a forest. Wood logs will last pretty long inside a furnace in Necesse. Now, let’s fuel up the furnace and get started crafting some Iron Bars!

Each Iron Bar will cost 4 iron ore to craft. You can hold the SHIFT key and left click the crafting recipe to make as many as possible in one hit. This will save a lot of time. Now we should have a lot of iron bars! Let’s see what we can craft with them! You can also forge any broken iron tools you found along the way into iron bars as well. Each iron tool will give you 2 iron bars. Broken Iron tools cannot be repaired and used.

Iron is one of the most versatile crafting materials in Necesse. You can make a seriously huge amount of stuff using iron. I will try to break down the many categories that Iron can craft into and talk a little bit about some of the things that can be crafted.

One of the most obvious things that can be crafted using iron bars in Necesse would have to be weapons. Iron weapons are the third tier of weapons, (right after wood then copper). They provide a relatively strong stat boost compared to copper. You can craft an Iron Sword, Spear and Bow in this tier. Iron will also be used in the creation of Void Level weaponry.

In terms of ranged weaponry, iron is used to craft both simple bullets and iron arrows for bows.

Iron, list the other two common metal types can be used to make a suit of armor. This metal is the second tier in armors and is surpassed by gold equipment. That being said, it isn’t a large jump by any means so you can feel free to spend some extra iron on a new armor suit.

The gold helmet is only 1 point in armor stronger than the iron helmet. So if you are scared of wasting the resources only to have them surpassed soon, don’t be!

Crafting Furniture and Items with Iron

Iron is also used in crafting a large amount of furniture and resource stations. Iron is used to craft both the cheese press and the grain mill so avid farmers are going to have to get onto the mining train at some point!

Iron is also needed to create tools for animal husbandry. If you are planning on shearing those sheep yourself or milking the cows, you will need some iron to create these tools. The shears and bucket can both be crafted using iron at the Anvil.