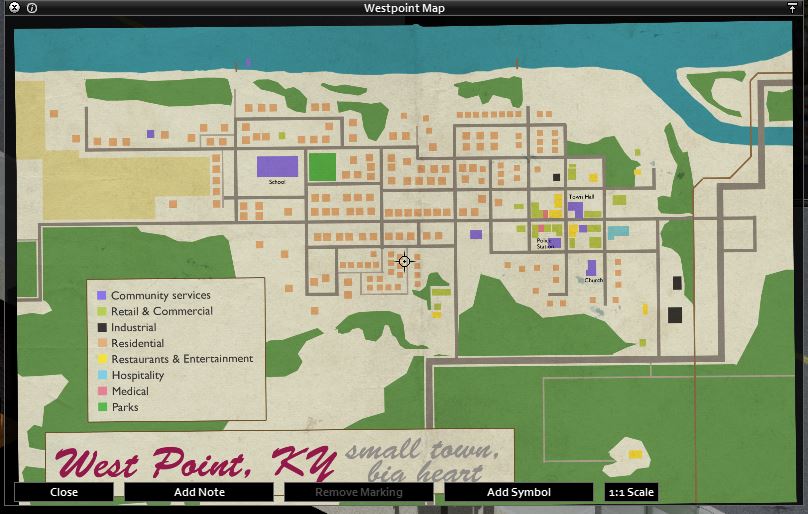 Hello survivors! Today we are running through my favorite little area in Project Zomboid, West Point! The high density, death field of West Point is a town full of hustle and bustle. West Point is one of the spawning locations that can be chosen when playing the sandbox mode of Project Zomboid. Located to the east of Muldraugh, it is an a fairly ideal location for travelers wanting to check out either Muldraugh or Valley Station, (which is to the east of West Point). The map will show you some of the building you will see in the town, though it excludes the outskirts of the town.

West point is one of the highest zombie spawning cities in the game. With a large shopping street it houses the highest population for any area on the map. As with the other maps, it doesn’t have any great descriptions on most of the buildings. It has a legend which follows the same color scheme as the other maps on the bottom left side. The map shows a large river on the top side of the town and by crossing the river to the top right of the map, this road will lead you up to Valley Station.

Some of the notable key areas on the map are:

How to get a West Point Map

Maps can also be looted off the undead once they are killed notably off of zombies that are dressed like survivors. Occasionally you may see a zombie with decent gear and a hiking backpack. They seem to have a good chance of having an area map.

How to use the map in-game

To read a map once you’ve finally located one, simply right click, or select the map using the appropriate button on your controller. (For Xbox controllers ‘A’). From the drop-down menu for the item, select ‘Read Map’. Note that there is also a button to Rename Map, we’ll go over that afterwards.

Once you have selected Read Map you will brought to the map as the one you could see at the start of this article. You can zoom in on certain parts of the map by using the scroll wheel on your mouse and move around the map by left-clicking and dragging the mouse.

When you select ‘Rename Map’ you will be taken to a text input where you can rename the item for the West Point map. This can be useful if you have multiple maps and wish to mark different things on them. Or if you want your buddy to have a map that is the same as yours.

As with the other area maps in game such as the Riverside Map, you can mark areas of interest on the map and also write text on the map. See the image below and read ahead.

If you wish to mark a map in Project Zomboid you will need to have either a pen or pencil. To write in a certain color you will have a pen in the corresponding color. To mark symbols, such as the ones on the image above, select the menu Add Symbols on the bottom of the map UI.

If you wish to add writing to the map, select the item at the bottom, ‘Add Note’. You will then only have to click an area of the map that you want text on and start typing. This can be useful in situations like above, where you can scan out areas that aren’t safe to loot at that particular time, but you want to come back to later to loot.

That’s everything you need to know about the West Point map in Project Zomboid. Hopefully it will help you stay alive out in Knox County and help you get around town in West Point. What is your favorite place to make a base in Project Zomboid? Let me know down in the comments below.